The purpose of this article is to summarize several change theories and assumptions about the nature of change. The author shows how successful change can be encouraged and facilitated for long-term success. The article compares the characteristics of Lewin’s Three-Step Change Theory, Lippitt’s Phases of Change Theory, Prochaska and DiClemente’s Change Theory, Social Cognitive Theory, and the Theory of Reasoned Action and Planned Behavior to one another. Leading industry experts will need to continually review and provide new information relative to the change process and to our evolving society and culture.

There are many change theories and some of the most widely recognized are briefly summarized in this article. The theories serve as a testimony to the fact that change is a real phenomenon. It can be observed and analyzed through various steps or phases. The theories have been conceptualized to answer the question, “How does successful change happen?”

Kurt Lewin (1951) introduced the three-step change model. This social scientist views behavior as a dynamic balance of forces working in opposing directions. Driving forces facilitate change because they push employees in the desired direction. Restraining forces hinder change because they push employees in the opposite direction. Therefore, these forces must be analyzed and Lewin’s three-step model can help shift the balance in the direction of the planned change.

According to Lewin, the first step in the process of changing behavior is to unfreeze the existing situation or status quo. The status quo is considered the equilibrium state. Unfreezing is necessary to overcome the strains of individual resistance and group conformity. Unfreezing can be achieved by the use of three methods. First, increase the driving forces that direct behavior away from the existing situation or status quo. Second, decrease the restraining forces that negatively affect the movement from the existing equilibrium. Third, find a combination of the two methods listed above. Some activities that can assist in the unfreezing step include: motivate participants by preparing them for change, build trust and recognition for the need to change, and actively participate in recognizing problems and brainstorming solutions within a group (Robbins 564-65).

Lewin’s second step in the process of changing behavior is movement. In this step, it is necessary to move the target system to a new level of equilibrium. Three actions that can assist in the movement step include: persuading employees to agree that the status quo is not beneficial to them and encouraging them to view the problem from a fresh perspective, work together on a quest for new, relevant information, and connect the views of the group to well-respected, powerful leaders that also support the change. 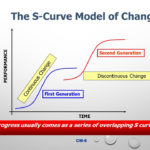